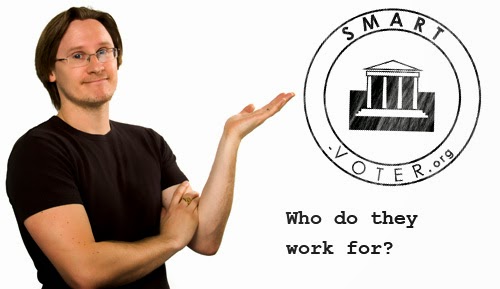 Don't take my word for it.
Demand the same rights you have when you
buy a packet of crisps!

I'm fed up with politicians.

That's why I'm standing as an Independent councillor?

From MPs expenses scandals to the murky world of local development contracts, I'm fed with those politicians with vested interests. Lets bring honesty and accountability back into democracy. If we can't fix the cause of the problems here in educated middle class Wokingham then where will it start?

Well funded liars have the advantage, having the time and financial motivation to go door to door or send personal letters to all they plan to leach from.

I'm willing to honestly represent the community, but I'm not going to beg. Do you beg or pay  to be the one to help your neighbour move house? Perhaps... if you were a theif.

Every 'volunteer' will say that they offer hope and change on the issues that you care about. In Evendons you may hear about.


No matter who you vote for this year the existing Wokingham Borough Council planning committee will approve..


Those standing on a suggestion that they will represent your view. Do they have a method of achieving it? They are one voice in 53 of which 43 are Tories.

If they are a Tory, will they break rank? Is the decision passed up to a senior Tory who will not represent you?

It may be that the Tories do represent your view. The problem is that no-one really knows because fair consultations are never run and conclusions seem to be spun.

With no down of costs and the ability to appoint who both negotiates and scrutinises contracts the establishment have both the means and the motive. All I needed to do was to ask for information and consider if the resistance I met was appropriate. 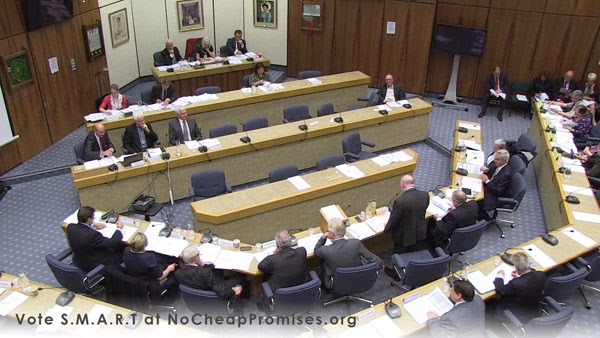 So Kaz. What made you suspicious?

It all started when a friend told me of public forum where there was an awkward moment amongst the presenters about work on Peach Place being dependent on a partial sale of Elms field, and that it would have been helpful to have had that on film in later disputes.

I then attended a South of Wokingham SDL meeting where the highways chap was trapped admitting that he was there to facilitate the development, not resolve congestion problems. This was not minited.

Since one of these projects is to drive through a £100m construction contract on debt with relatively small profit margin, and the other is to change farm land value of a farm by about £200m for someone else, there's plenty of motive for corrupt individuals to control every aspect of what is recorded as being said and asked. I concluded that it is essential that the discussion are a matter of accurate public record.

I asked to film the next forum and to cut a long story short, it was clear to me that the SDL strategic partner said no at the last minute. Who does our council work for?

I did my research and every councillor is obliged to support transparency unless 'clearly in the public interest no to do so' Councillors can't oppose filming of such meeting. As the challenges progressed, councillor Keith Baker resorted to dishonesty, either that or an incredible short memory and confusion. He even threatened to sue me for attacking his character. I had evidence.

I took the matter further to the executive. No acceptable answer was given and key points removed from the minutes.

I asked democratic services to act and received a letter effectively stating that that collective council decisions don't count for individual breaches.

My request for the previous £100m contract from Alistair Corrie was dismissed out of hand, as was my Freedom of Information request to democratic services. It then dropped by 5% to £95m after I got the Information Commissioners Office involved and a redacted version came forth. I gather from another activist that we may be able to access a fuller version owing to the level of Public interest.

Weeks after pointing out a conflict of interest regarding our £2.2m yearly IT contract, there was some computer down time and the contract was eliminated.

Have I saved us £millions in crony contracts already just asking for transparency?

You have to put into context what a Borough Councillors is 'supposed' to be.

You . . with real job and not neglecting your family are supposed to be the borough councillor

Most people do not understand what a borough councillor is, hardly surprising since the roles are so poorly advertised.

We have a well paid employed council with our chief executive Andy Couldrick on just under £160k (with several deputies on a bit less).

Your 'elected councillor' is supposed to be a representative member of your community who ensures that the employed council carries out our wishes / best interests and in a transparent manner subject to our scrutiny.

We no longer seem to have that in Wokingham. We have 'paid volunteers' competing to win for their political team. People who somehow find the time and resources to knock on 1000's of doors delivering leaflets (This is not you!) only to then block information you have a right to, appoint contractors to spin consumer data and put up dishonest posters.(This is also not you!)

How do I find out about my candidates?

Well not blindly trusting a charismatic sales person backed by vested interest money on your doorstep. Don't exclude everyone who has NOT paid to send you and 6000 other people a personal letter. Your candidate is supposed to be a neighbour willing to do you a favour.

It is unfortunate that the local council still does not provide a candidate website with an image and a set number of words for each candidate. Both unfortunate and telling (watch this space).

Why is what candidates put online more honest than what they say on the doorstep?

Simple. Public domain information. Would you hand £2,000 to a nice sounding chap because he told you he would perhaps clean your roof tiles one day in the next 4 years? No, you would expect a contract, seek other quotes and compare what commitments such as time scales were in the contract.

While the website is no contract, should you wish to complain it would not be a case of he said she said. I have first hand evidence that you can not rely on a councillor to remember that which he wishes to forget even in a public place, and even the leader of the opposition sided with him too! (The plot thickens)

A manifesto is a kind of contract!

If it were lib-dems would have voted against higher tuition fees, Tories for more wind farms and solar subsidies  as well as a referendum on the Lisbon treaty.

That is not to say your particular candidate will break their manifesto pledges, but they can, and do, even if they lead the party.

Not very democratic is it?

Imagine if a sandwich maker could advertise anything in a 4 year sandwich contract, then supply anything or even nothing, not even try, and you have to keep paying for the full four years.

That's what we have let our democracy become. How did our parents let this happen? Will we leave the same mess to our children?

You have a solution?

Yep! And it's just common sense.

SMART-voter.org (look into it later)

It's basically choosing only candidates committed to providing a clear list of true obligations, such as how they will vote on an issue, for you to compare. Anything less is not really democracy is it?

I've asked a lot of local political characters to sign up to SMART-voter.org. People who usually have an answer for everything.

When you tell them you're a SMART-voter.org and ask if they are SMART-voter.org friendly the dialogues suddenly just stop. At best you get politely ignored with a link to a manifesto and the reply 'This is pretty SMART' or some other way of avoiding answering your question.

This tells me 2 things.

How's this for a cool tattoo?

What about you Kaz?


There is no downside in voting for me. I will be 1 voice in 53. You'll finally have one voice insisting that the council should be more transparent and accountable. If the council is presently full of honest well meaning people, good decisions will continue to be made. Mark Ashwell will continue to be an enthusiastic sponsor of local events, even if he can't act on his vested interest in owning a windows and conservatory company surrounded by properties built by developers who owe him one.

I can't change the monthly motions if the majority is of vested interest leaders and their blind followers. My best hope is to introduce the risk of repercussion from self interested voting.

If my motions are rejected then the councillors who rejected them will be on video breaching their code (again). I hope this time you become more active.

I have lots of good obligations in my 7 sides A4 SMART-voter.org promise list. So download it and get a feel for how responsible democracy should look. (eventually it should be a database, you check your policies and compatible candidates are listed but lets start with the concept of transparent obligations)
I ask you to be a SMART-voter.org. Ask other candidates to do the same.

Consider standing yourself on the SMART-voter.org ticket next year.

I'm not asking you to vote for me.

I want the person best able to and most likely to push the agenda of Evendons ward residents, and what is in their fair best interests on matters they have not been able to be consulted.

That may not be me. But do at least expect a better candidate to provide you with transparent obligations as I have.

Then you can make an educated decision.

Without an educated decision, you do not have a democracy.


Thank you for your time.

Spot the politician who can't answer a simple question.

A video of a hot bloke.

A bit about me.

A bit about my politics.

Here is some info for someone honest who might stand for election in future.

Posted by Kazek Lokuciewski at 11:24