Like most western, non Jewish people, the whole Israel / Palestine thing for me was filed under third world extremists for a long time. So I decided to do what little research I could from my cosy armchair.
One picture for me was a bit of a show stopper that needed little in the way of explanation. 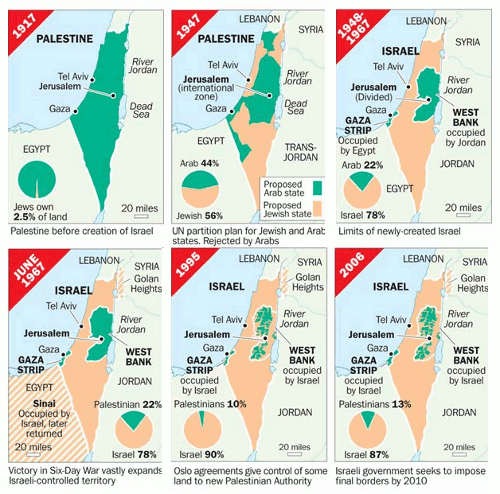 But there are two sides to every argument.
When research into the sides of an argument there are two paths.
1. You read through everything you can get your hands on.
2. You draw conclusions with the information you have on the fly, and vocalise them, but keeping an open mind to the responses you might get back.
I find the second approach more efficient, if not more confrontational.
Please to fill me in if you have any fair arguments for why in 1947 one of the greatest travesties in the history of mankind was committed. Palestinian land split in such a way that Israel became 3 territories, which it then quickly joined and expanded.
Throughout all this time western powers have been funding and arming Israel in such a way that the western public effectively fund an aggressor in the middle east and arm it, which in turn spends that money on arms from the west. Effectively taking the benefits of the productive economy and directing it towards the destructive economy.
I fully accept the destructive side of human nature when it has nothing better to do and a sense of entitlement and can respect that certain people with a grander belief have come to the conclusion that a destabilising the east is an essential part of keeping the west safe.
I would like to tell a related story that might not seem to be in its telling.
I remember a startling moment when myself and an English born man of Pakistani decent were chatting in one of the many waiting areas while our wives were going through labour at Reading hospital.
We were both clearly interested in politics and religion (me being agnostic).
At some point he spoke of there being an almighty Christian Muslim war, and that when the call comes he and his brothers to band together and fight.
It was the perfect place for me to do my speech about a brotherhood, that he is my brother and who should be able to call him to murder me or our children to murder one another. I spoke of how if I was commanded on pain of death to me and my family to commit murder in another country I would turn on those who saw fit to command it.
But I was surprised by the event.
I have through marriage a Moroccan Muslim family and feel there is no risk of them baring arms on the whim of a religious figurehead. Perhaps because their figure head appears to be a good and caring man. I found this fanaticism coming from the mouth of a 2nd Generation Brit, in the maternity ward of all places.
Condemning our children to bloody murder with a sense of pride.
I hope my points had some impact.
So how does this story relate to Gaza and the West Bank?
I would like to use it to answer the several trains of thought that might be used to justify the Israel Gaza offensive.
I will not deny that, at some time long gone, a poorly educated, impoverished Muslim majority could be convinced by fanatical figureheads to do bloody revenge on the evil of the Crusading Christians. The rise of the computer and international relation however suggest to me that we have long been at the point where the educated wish to enter a global peace. Yes there are small groups. But they are hopeless groups with a poor quality of life. But what creates those groups and how can we help them
Who is the fanatic. Almost all of the developed world has a charter that forbids restrictions and punishments on religious grounds alone. The democratic population surely would not warrant taking 80% of another country, paid only in violence.
I agree. Lets have mandatory historic atrocities and their causes on TV for 1 hour a day. No need to cause it.
That is a good reason, and would work fine if we could trust ourselves. But since each of our past prime ministers establishes a trust using an offshore company to own £m's unregistered investments, we are in no position to ensure our leaders have that purpose in mind, even if they suggest it.
My fear is that the real cause is something more sinister, and at the same not sinister at all.
Vested interests.
Take a company like BAE Bowing and Airbus they needs to sell fighter jets to stay afloat. There is a lot of money flying around at the air shows and while the companies may not be complicit directly, there is rarely a big investigation into where the large bonuses go.
Where I say it is not sinister is that we all know that 1 in 100 people is narcissistic, a crook. they would sell their own mother for £10k. Where this becomes sinister is that the most intelligent, organised and analytical of these people are able to the occupy positions of power and, unlike the selfless or modest they seek them out.
Lets say 1 in 100 of our narcissists is a genius. We have now one in 10,000 who is able to manipulate those around them in the most efficient manner using the tools they have. Lets say one
In the UK that would mean we have, of business age, 2000 leaders who will do anything to get rich, are vengeful and are extremely clever about it.
That's a lot of people who are willing to grow their offshore trust fund by investing in £36b/year arms contracts and then stimulating this without a care. 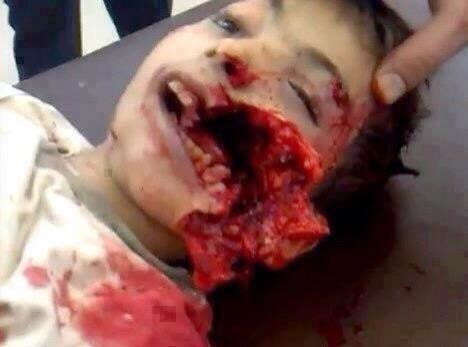 Remember, these 2000 people in the UK alone do not need to do the work. They need only set up a hedge fund and offer a generous bonus. It just takes a few of the 1 in 2000 to go after the bonus in the resulting country. £100k will go a long way in many developing countries.
So how does this relate to the title?
Simply this. Our large press outlets, our governments positions, and the map at the top of the page.
Our press has boycotted this information. They do not speak about the fact that the Gaza strip is the most densely populated place in the world, where do we expect these people to go, how will they feed themselves without land to grow food on?
Not one conservative politician seems willing to condemn Israel and agree that Palestine needs to have a lot of land given back before they can become a people who have the land they need to build hope for a quality life for their children. It's that hope that places value on life.
If their reasons are:
Then they are surely not worthy of the office they command.
If they have good reason for not only allowing but assisting the continued occupation.
Then as a democracy we should expect to hear it. Not demanding the justification make life much easier for the 2000 genius narcissistic leaders in the UK.
I have yet to hear it. 'It's complicated' is not enough reason for the US to hand $3b a year to a country that does not run at a deficit.
The silence is deafening. Not only that but those in the public eye who speak out, are being boycotted by industry leaders.
http://www.independent.co.uk/news/people/cruz-and-bardem-face-fury-of-hollywood-following-genocide-letter-condemning-israel-9659707.html
And this is why I support a boycott, though I would like to see more focus on celebrities, especially those who normally use their profile to influence public sentiment.
I do not blame Jews for the Israel occupation of Palestine the same was as I do not blame you or I for dividing the land and providing financial support and arms to the Israel government. While we must accept a blame of complacency, we did not act, and nor have most Jews.
Money is currently boycotting those who speak out against the Israel occupation of Palestine, especially in Hollywood and the UK and US governments.
Our leading figures are proving themselves again to having some hidden agenda.
Yes, boycott the Israel products, I fear however we will find that out governments will simply provide bigger financial aid to ensure the region remains.
Boycott those celebrities who refuse to speak openly on the issue the way they should. They hold the key to public opinion and the resulting political change.

Where is all started 2000 years ago.
http://history-of-israel.org/history/chronological_presentation11.php

Balfour Declaration (Where Rothschild's money started meddling in Wars again)
http://en.wikipedia.org/wiki/Balfour_Declaration
Ex Rothschild Employee Redwood fails to condemn Israel
http://www.getreading.co.uk/news/local-news/john-redwood-mp-time-reflect-7578852
Israel drone engines manufactured in Staffordshire
https://www.middleeastmonitor.com/news/europe/13238-israeli-arms-factory-shut-down-by-uk-pro-palestine-campaigners-shut-down-ongoing
Hamas government fanatasism.
http://news.bbc.co.uk/2/hi/8557251.stm
How much value would we place on your life, and the life of your children if we were crammed into Gaza with nowhere to go? Value of life is proportional to quality of life.
http://www.americanthinker.com/blog/2014/07/hamas_leading_their_people_to_death.html
2013 £12b military exports to oppressive regimes.
http://www.independent.co.uk/news/uk/politics/blood-money-uks-123bn-arms-sales-to-repressive-states-8711794.html
Palestine / Gaza population
http://www.palestine-diplo.com/spip.php?article733
Posted by Kazek Lokuciewski at 15:25 No comments: