The majority of us, aware only that something was being proposed via hear say, finally had our chance to look at the plans today. From what I can gather  Alistair Corrie signed off a £100 million deal this morning before the over busy of Wokingham had a chance to to view it on-line in what little spare time we have.

I can not believe this is legal? (update we have not agreed to a £100m deal we have agreed to pay Wilson Bowden an unknown sum to properly look into it)

We don't get a simplified breakdown as to what the £100 million means. Who pays who what, who owns what at the end of it? When tweeting @wokinghamBC for a copy of the contract the fist response was 'what contract' when I made it very clear there was no reply.

In the mean time. Since the information is finally available I have made a couple of images so that you can see the visual plan for #wokyregen. 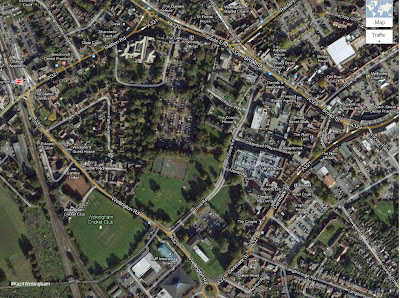 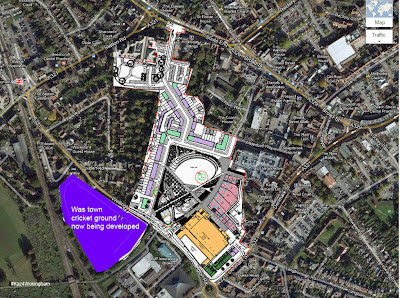 You may note that the Children's play area is about half the size of a tennis court.

Parking I assume one space per dwelling? (update. They said there are two. I pointed out there was not two in the design and not space to add. I guess it may be there could be a second space in the underground car park)

Schools STILL NO NEWS! Doing a rough sum. About 1child in primary school per 8 dwellings that's 18 more children (not including the extra dwellings on the Cricket Ground, Molly Millars, Blagrove Lane, the Guide Dogs for the Blind site and the closure of White House School all set to affect local demand.

Really rough sums lets call that 60 'more' primary school spaces needed, squeeze them in and maximize profit or quality of life? Well profit is quality of life when your salary is related to savings.

But it's not all bad. You have to look at all this as part of the big picture. I'm not sure why something as user friendly as this picture has not been on the front page of getwokingham or a prominent link on the wokingham.gov site, since it is possibly the most significant thing going on. Ok, I added flood plains.

Anyway. Here is the bigger picture as far as I have gathered. Now off to play with my kids.

Is it ironic that I have to neglect them now to fight for their future living in a country that can sustain itself? (download full size) 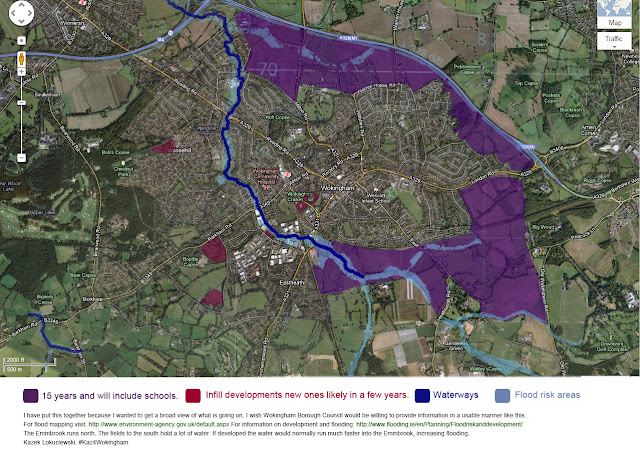 Posted by Kazek Lokuciewski at 11:36